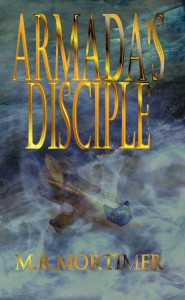 Armada’s Disciple is the second book to center around the adventures of Starlight Hodgens and Janice Heartmyer.

Follow them as they investigate a series of troubling events and uncover a serious plot to trigger war between Humanity and the rest of the FSC! Can they foil the evil schemes of the one remaining disciple of the defeated and shamed Banshick Armada? Can they withhold the honour of humanity and save us from a war that would end peace in the galaxy? Can they bring to justice those who would see the Federated Species Council destroyed?

This second book to feature Starlight and Janice will take our young agents on a testing and difficult adventure deep into alien territory. In this book you will finally get to meet some of the other species who are member races of the FSC and spend some time exploring the wider galaxy that this fictional universe occupies. We will even be spending some time on the Preeacsil home world with Haark Junli.

For a rollicking adventure gallivanting to all the corners of the FSC, look no further than Armada’s Disciple.